What is Artificial Intelligence?

On October 25th, 2017, Sophia became a citizen of Saudi Arabia. Even though this country has millions of immigrants among its residents, Sophia’s citizenship became world news. She was unique due to the fact that she was not born but built. She not only became the first robot in the world to acquire citizenship, but also spoke at the United Nations, appeared on numerous talk shows, in magazines, and even in music videos around the world. Although interviews with Sophia did not always go smoothly, she became world-famous and brought the lightning-fast developments in artificial intelligence back into the spotlight.

The hype around Sophia was not the first time that artificial intelligence dominated the headlines. In 1997, after a legendary chess game, people were seriously wondering if the era of humans as the pinnacle of intelligence had come to an end. Reigning world champion Garri Kasparov, considered by some as the best chess player of all time, lost to a chess computer called ‘Deep Blue’ with a score of 2 ½ against 3 ½. Nowadays, we consider ‘smart’ devices as normal. There are already a handful of self-driving cars in the USA, and more and more people have a computer assistant in their homes, such as Alexa or Google Assistant. Are we now gradually entering the era of truly intelligent machines? What do we actually mean by intelligence in machines? And does this signify that we humans will soon all be able to retire early?

The supercomputer Deep Blue played better chess than Kasparov and won the game. But to achieve this result, the machine worked very differently than its human opponent. Deep Blue used a computer memory full of millions and millions of chess positions, drawing upon thousands of successful moves by chess grandmasters for every position. IBM, the developer of Deep Blue, estimated that the machine could analyze 200 million different moves per second. The machine then compared the results of those moves against her computer memory to determine the best move. Chess grandmasters are known for being able to think quite a few moves ahead, but even a champion like Kasparov is nowhere near the arithmetic brute force capabilities of Deep Blue. Yet, Kasparov managed to take 2 ½ points in their games. Deep Blue won the match, but the question is whether the machine really was more intelligent than Kasparov.

In this book, we speak of artificial intelligence when machines can take over or support human cognitive tasks. These are, for example, tasks related to learning, making decisions, and solving problems. We do not limit ourselves to a ‘human’ way of acting. All machines that can make smart decisions fall under this term, including Deep Blue. Artificial intelligence, according to this interpretation, is part of computer science.

Broadly speaking, this can take shape in two ways. The first form is that the machine is pre-programmed to follow certain rules. These rules are devised by human programmers or scientists and follow a logical pattern. Following the rules leads to intelligent device behavior. An example of this is the first navigation system, which determined the fastest route from A to B based on pre-entered mathematical rules.

Over the past decades, a second form of artificial intelligence has become increasingly popular. In this approach, the designer no longer directly gives the rules to the machine, but explains to the machine how it can understand the rules itself. The machine then examines large quantities of examples to understand how to make decisions based on them. In modern navigation systems, this method of artificial intelligence is used, for instance, to allow the device to learn where traffic jams are by comparing data on the speed of different road users. With this new information, the system learns to determine an even more efficient route.

This second form of artificial intelligence, where the system is expected to learn to make its own decisions, is called ‘machine learning’. With the advent of ever-growing computational power and possibilities for storing enormous amounts of data, this field has grown explosively over the past two decades. It is not limited to chess computers or talking robots; companies also make good use of machine learning. For example, their websites learn automatically from the users’ behavior to optimize the user experience. Or they use machine learning to learn which products their customers might find interesting. 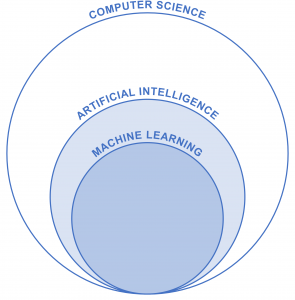 Whether a computer uses pre-programmed rules or full-fledged machine learning systems, ultimately, a programmer determines how the device will achieve its goal. This is done through algorithms, which are fixed sets of instructions written in such a way that a computer can follow them. You can read about how to build these kinds of algorithms, and how computers work in the chapters on programming and computers.

There are numerous ways to help a computer learn from data. The study of machine learning is about designing and applying these kinds of methods. This is done based on mathematical models, which should help the computer ‘understand’ a situation.  You can read exactly how this works in the chapter on models. A number of modeling techniques are described in the chapters on neural networks, classification, decisions trees, Markov models, unsupervised learning, supervised learning, and reinforcement learning.

The fact that artificial intelligence and machine learning, in particular, has boomed in the past few decades is largely due to technological developments. The storage capabilities and processing power of computers have increased exponentially, and with the rise of the internet, the amount of available data to learn from exploded. You can read about several technological developments crucial to the enormous impact of artificial intelligence today in the chapters on data, the Cloud, and APIs.

The enormous increase in technological possibilities has led to a significant increase in artificial intelligence applications in almost all conceivable fields. Techniques and methods from artificial intelligence are frequently used in science, such as physics or medicine, as well as in commercial applications. This has led, among other things, to new professions that didn’t exist twenty years ago. Developers of AI algorithms are highly sought after in the job market today. With job titles such as data scientist, data engineer, or machine learning engineer, they help companies, governments, and researchers to make optimal use of this promising new field. In some areas, the development of artificial intelligence has lead to new workplace opportunities for people, instead of early retirement.

In this book, we give a glimpse of what this exciting, increasingly important term entails. Welcome to the world of artificial intelligence.

You have just read the first chapter of our upcoming book on AI stories: A must-read for anyone interested in the exciting field of artificial intelligence, regardless of how much you may or may not already know. Over the following weeks we will continue to post the rest of this chapter as well as more exciting content from the book on all kinds of AI topics and applications, from artificial neural networks to self-driving cars to computer-generated art. Follow us on LinkedIn for more inspiring AI stories!